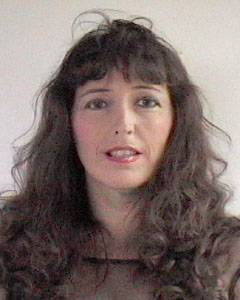 As a clinician, Julie has tackled even the most difficult of cases with great success. She is skilled in treating areas such as pain reduction/management, Post Traumatic Stress Disorder, Suicide Ideation, Depression, Phobias, and a wide variety of medical conditions including Pre- and Post-Surgical Hypnotherapy, Multiple Sclerosis, Cancer, Hepatitis C, and Hypertension.

Born into a family plagued by chronic, often debilitating pain, Julie has a deep and personal understanding of pain’s many detrimental effects. Julie has been testing a safe, natural endorphin release self-hypnosis program for approximately 12 years with amazingly positive benefits being reaped by her clients—and herself.

In August 2004, Julie received the prestigious: Hypnosis Educator of the Year award from the world’s largest hypnosis agency, the National Guild of Hypnotists based on a vote conducted by the agency’s worldwide membership. In past years, Julie has also received the Hypnosis Journalism Award from the National Guild of Hypnotists and the Hypno-Innovation Award (for her programs designed for safety and ethics in hypnotism) from the International Association of Counselors and Therapists.

Over the last 17 years, Julie has presented hundreds of basic, intermediate, and advanced level hypnosis and self-hypnosis trainings in the United States, Indonesia, and Canada and has presented at 18 national conventions. For five years she was a columnist for the Journal of Hypnotism. Her inspiring articles written for the public and professionals alike have been featured in multiple publications, including Unlimited Human and New Horizons.

A highly skilled medical hypnotist, Julie has been a lecturer at Massachusetts General Hospital, Southern New Hampshire Medical Center, and Malden Hospital. Her programs are used by dozens of hypnosis practices and clinics across America. Her program: PEACE OF MIND was used in clinics to help affected Americans deal with the aftermath of the September 11, 2001 tragedy and the Anthrax scares that followed.

She was in Indonesia a week after its catastrophic Tsunami of 2004 where she trained over 100 individual students including medical doctors, psychologists, and clergy in simple, effective techniques to help address the issues faced in the aftermath of the loss of approximately 160,000 of her people. She developed, taught, and freely distributed to the Indonesian media, programs designed to help Tsunami survivors overcome Post-Traumatic Stress Disorder and to prevent individuals from contracting such diseases as Tuberculosis, Malaria, Dengue Fever, as well as air- and water-borne disease and parasites. Since that time her students have helped to train 3,000 more professionals and lay people to help with the 2006 earthquake that killed 6,000 more and left tens of thousand homeless.

For the past 15 years, Julie has been a reoccurring featured speaker at New England’s Whole Health Expos, offering a variety of popular hypnosis topics including: Love & Prosperity, Enlightenment and Fulfillment of Highest Purpose, and Sexual Healing & Enrichment. She is the author of 12 hypnotherapy books, and dozens of articles and audio programs, Julie thinks of herself as a teacher first, rather it be alone with a client, in front of an audience or group, or in her classroom. Her most current work is in modernizing hypnosis and making it more user friendly in today’s fast past world. She is developing new delivery systems for hypnotherapy that are equally appealing to men, women, and children.